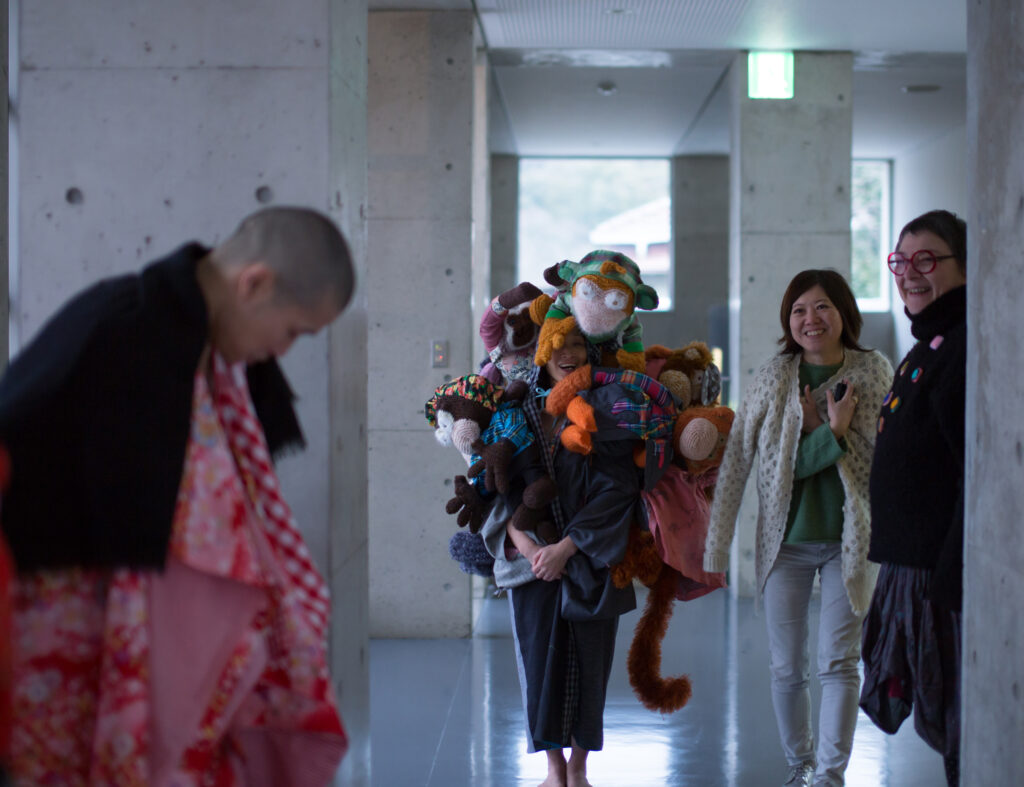 HAVE YOU MET MICHA DERIDDER?

What if your wardrobe could speak? What would it say?

Well, Micha Deridder’s clothes have a lot to talk about, which makes one wonder if they can still be called/reduced as.

Now, if we had to – only if we really had to –, it would, probably, be ok to say that Micha’s a plastic artist who’s graduated top of her promotion at La Cambre Mode in 1994 and, since then, she been working fashion and textile as means of questioning things. What things? ALL THINGS.

Yet, it would put Micha and her work in a box. Micha doesn’t like boxes. Actually, if the box could transform into another box and that box would then become a robot and that robot would be a pretty cool interactive robot, maybe she would like that box.

Micha Deridder is our guest for the month, and she brings along a book, her book; through ‘Essayages’ the artist goes over a +25-year career in both contemporary and applied arts, as a mean to sort it all out, for her, for the reader, and who knows; it might be useful to someone. Useful; it seems to already have been as many have reached the artist saying the book changed their outlook on life. Pretty big statement, right?

Also, she’s not actually bringing in the book because we have it already. In fact, we’ve had it for a while (because it’s good) and now, we have Micha.

Starting February 3rd, Extra-Ordinaire will showcase a selection of the artist’s creations; some to be worn, others to walk on/through, some to be held/felt but all to be lived and not all pieces are made using textile; Micha doesn’t like boxes, remember?

A talk will be held on the 10/02 where Micha and the editor of her book – the Belgian sociologist Daniel Vander Gucht – will discuss the process of compiling and sorting the artist’s work/career into ‘Essayages’.

On Saturday 12, children (big: parents, small: kids) will be invited over the shop to create their own costumes during Micha’s workshop.

Get to know Micha Deridder through Extra-Ordinaire series of questions:

WHAT DO YOU WITH E-O?

“With Extra-Ordinaire, I present my book. I work in contemporary art but also in applied arts in which I make objects; things that have a use. What I find great about working with E-O is that I can show both what I do in the former and what I create in the latter. I get to present all aspects of my work.

‘Essayages’ is the result of 4 years of work including 1 which was taken to solve the problem of ‘how to sort my work and make it book that people can understand and refer to’.

There’s going to be all sorts of things; functional ceramic objects, for example, like mugs, boards, etc. Visitors will also get to appropriate/make their own of pieces of an installation. I want creativity to spread, flow.

I’m working on blankets that become playsets or costumes that can be shared. Things to play with and wear. It’s like the blanket becomes a piece of clothing. All that with scraps and second-hand fabrics which I’ve collected.

I also knit landscapes with bits of threads I gather from all around. Prior to starting to knit, I assemble the matter by tying end-to-end the bits of gathered threads. I don’t have a clue of the direction it’s going to take, it’s very random and spontaneous. To exemplify; I was in residence in Vendée (a coastal region located in Mid-West of France) and as I was, one morning, making a ball of thread I realized that I had unconsciously chosen the colors alike the ones of the sunrise I had seen earlier.

I keep a lot and question what the matter becomes. Like, I collect the dust of the dryer because, to me, it’s the last expression of a garment. With it I make tiny worlds where plates of dust, along with scrap threads, overlap to become geological layers. This comes from a reflection I had on the impact of geology; not only on the development (agriculture, industries, etc.) of a region but also on who people are and what they live daily.

I try to go at the basis of creation: why do we create and how to sufficiently let go to; not only take what arises but also to listen to what comes out of it.”

COULD YOU TALK ABOUT WHAT WILL BE SHOWCASED AT E-O?

‘Monkey Family’: a series of monkey dolls tied to a big kimono that are made using recycled threads and fabrics collected in Japan

“This project is part of another one called ‘La Valise Japon’ where I travelled to Japan only taking – to be exhibited – what could be stored in 2 suitcases.

My desire was to get in contact with inhabitants and build a project from and around them. I mostly collected scraps from the fabric makers I met with. I wanted to meet people that were not necessarily in the fields or art.

I also brought back rolls of kimono fabrics with the intention to use these rolls as there are intended to: one roll (15 or 17 meters) equals one kimono and there is very little waste in the making.

With one of these rolls, I created ‘la plus petite expression’ which is the smallest piece to be made with such fabric-length. From my travels around Japan, I got to learn about the relationship Japanese people have with nature: they don’t go against it like we would; they work with it, they respect it.”

Words from the writer: ask Micha about the boar and monkey stories, it’s worth hearing!

‘Le Passage des 100 Seins’: an immersive and interactive installation made with threads (creating drapes) of beads – some handmade, others collected from family members or derived from various materials – representing breasts and other organic forms

“This project finds its roots in a disease I went through. It’s a play of words which, when said, can both be heard as ‘a hundred breasts’ and ‘without breasts’. I wanted to question what it means to be without breasts and, more generally, what it is to go through sickness: how it changes you, how it changes life. The way this piece will be set up in the shop will have visitors walk through it to access the other installations, like a life crossing having you see other things and see what you already know differently.”

“Manhole covers are special in Japan; they’re very decorated, it’s truly esthetical. I decided to replicate these using tarp and mixed fabrics as filling. In Japan, you have a different relationship to what’s beneath your feet by taking your shoes off on many occasions. As it was summer when I was there, I was barefoot most times and that had an impact on me. Each piece I’ve created is unique and made to be walked on.”

“There will be masks which I’ve made using material collected from villagers living where I had a residence in 2016. Also, because Valentine’s Day is coming, I decided to recreate a series of pieces made during a project I had with Hôtel Pommeraye in Nantes: sculptures of little couples carved in marzipan (almond paste); to decorate or to be eaten! There will be other creations too but that’s a surprise.”

“I was born in Charleroi, Belgium but I lived in a village somewhere in-between Namur and Charleroi. My neighborhood was very rural and traditional, but my school was right next to a coal pit where many immigrants worked. It’s something that forged me: multiculturalism. There were only a few Belgians in my class, thus amongst my friends; that opened me to the world. I now live in Nantes, France, which is between Bretagne and Vandée. I’ve been living there since only a month after my son, Zéphir, was born, which makes it 25 years. I came to Nantes for 1-year post-diploma cursus offered by Les Beaux-Arts de Nantes. Did it and stayed there.”

NAME 1 PERSON, 1 PLACE, 1 OBJECT THAT SHAPED YOUR PAST, PRESENT AND INSPIRES YOUR  FUTURE.

Past – a Place: The Atomium: “I have, since my childhood, been fascinated by it; my dad told tell the story of when he took my sister to the Expo 58 and it amazed me. On top of that, I love the aesthetics of the monument; it represents something which can’t be seen with the naked eye so; it’s something and nothing at the same time. All in all, it manifests an era when Belgium was flourishing (although on things that weren’t so ‘cool’).”

Present – A Place: an island: “I’m not sure if it started with Japan but I find that there is something very interesting with island population. My interest revolves around how we construct our identities and if these identities really exist. For example, Mauritius: there were no human beings on the island before it was discovered, no indigenous people and many flourishing life forms, like dears and does were introduced by ships.  People come and go but an island doesn’t move.”

Future – two persons: “My children: Zéphir and Wilma. They’re the ones building the future and what I try to do is to give them the tools to build theirs. I feel that’s what I do through art; to talk to younger generations and pass it along.”

“I think I’ve always found it, maybe because I see myself as a dreamer. A puddle which becomes a face, two merged carrots that turn into a pair of pants, the shape of stains, etc.  I wander and find the extra everywhere because it is everywhere.”

“I like the idea of the dash between ‘Extra’ and ‘Ordinary’: the former is so explosive while the latter is, well, ordinary, it’s even funny. The idea that there are extraordinary things in other cultures is something I’m very in line with, although I’m aware there’s a form of exotism in it. The dash plays a counterbalancing role in all this, which I find fascinating; the extra becomes the ordinary and vice versa. This shop manifests it well too; when you enter, it’s all ‘wow!’ but once you take the time to appreciate each item, you discover the associated cultures, and these objects can even become part of your ordinary. There is something very Belgian about this project, which, again, I’m in line with; Belgium, being crossed by so many people – its immigration – is what makes it extraordinary.