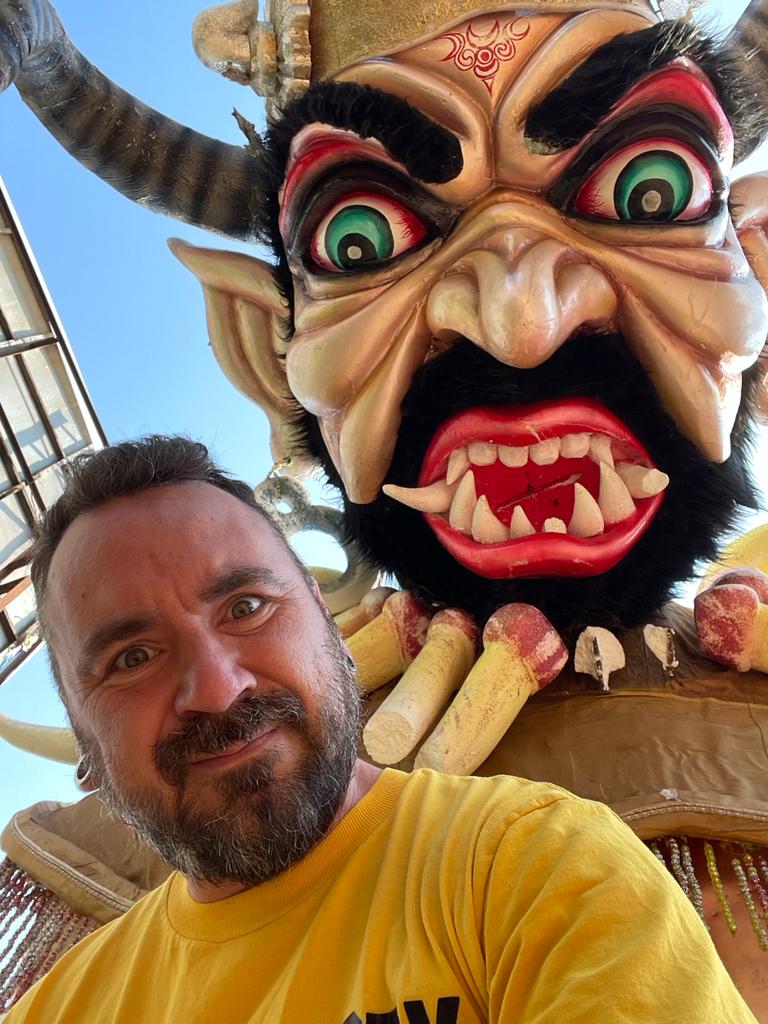 HAVE YOU MET JEAN-PAUL LESPAGNARD ?

Picture the Big Bang; the idea that the universe began as just a single point, then expanded and stretched to grow as large as it is right now (and it is still stretching)!

Now, think of Extra-Ordinaire as a never-ending cosmos made of ideas and people where creativity flows and beings with diverse technical backgrounds and cultures meet; and through these encounters new ideas can arise which more people around bringing other points of views fueling the making of unique creations fostering new partnerships, etc. etc. It’s infinite.

But no matter how big it is and maybe will be, Extra-Ordinaire had a start, its own BIG BANG.

Unlike the universe, it wasn’t a point, neither was it a thing.  It wasn’t exactly an idea either, although it followed. Yet, when what-we-know-as our universe began, it was just only made of tiny particles mixed with light and energy: a tiny, hot beginning.

In this article, we’re meeting the man who’s both Extra-Ordinaire’s trigger – its Big Bang – and its tiny, hot beginning: Jean-Paul Lespagnard.

“To begin with, I initiated the idea at the basis of Extra-Ordinaire. The desire to create such project arose when I was still taking part in the traditional fashion system: at the time, my team and I would develop a collection for about 6 months which, once finished, would be presented in Paris. Already at that time were my collections including various objects which were part of a whole/bigger concept. After showcasing the collection, the actual production was launched and, 6 months later, were the pieces finally delivered in stores. I felt a disconnection, with the world and with my vision; this due to the time lag between the conceptualization and the delivery and, also, because my resellers/clients couldn’t purchase the concept entirely; they were buying the fashion, but they didn’t have the money for the rest. I thus felt like the universe surrounding my collections was never properly showcased in stores.

Feeling that this system wasn’t fitted, I tried to launch discussions to put other structures in place, but I came to the realization that the bigger brands were comfortable in this order of things and that, being a young creator at the time, my impact wasn’t big enough to change the rules.

On top of that, I was always (and still am) visiting exhibitions all around and, every time I wanted to get my hands on the items, the things, that had inspired the showcased creations, I was bound to purchase what was available in the gift/souvenir shop. There’s so much behind and around a fashion collection or an expo and it is rarely made available for the public to be seen and acquired. That’s what I wanted to do with Extra-Ordinaire: to not only present textile creations but to take people in a whole universe made of various things, creations, inspirations. Extra-Ordinaire serves both as a shop and as a showcase space, yet everything you see you can buy.

Now, and since the beginning the project, I’m in charge of its general artistic direction which is working with creatives on the visual aspects of Extra-Ordinaire and thinking about how the tendencies I spot while travelling to source crafts and know-hows can meet the desires of our clients.”

“I’m based in Brussels although I’m not very often in the city! I’ve been travelling a lot these past years, and that pushed me to change my way of living: I went from living in a big penthouse in Forest (Brussels) to now having a tiny flat; it’s like a bird’s nest and I love it. I didn’t like the idea of having such a big place which was empty most of the time.

I come from Harzé which is a village in the Ardennes region in Belgium. I did my primary and secondary school in Aywaille – also located in the Ardennes and most famous for its wildlife park – then went to study Fine Arts at the Saint-Luc Graduate School in Liège.”

NAME 1 PERSON, 1 PLACE, 1 OBJECT THAT SHAPED PAST, PRESENT AND INSPIRES YOUR FUTURE.

Past – A person: Nicolas Wolkenar: “He was my teacher at Saint-Luc. He set up an environment – by organizing one-to-one meetings with each student on a regular basis – in which we could freely and discuss all aspects of our work. On top of that, he never secluded us in the classroom; we were invited to go outside, talk with other students, look things up online, basically discover. That really forged the way I work now: I like to search, meet, discuss with people, and challenge my ideas. The answer I have now could be totally different from the answer I have in the future because of how impacted it is by my current environment: who I meet and talk with. This allows freedom for things to evolve. The creative matter is never finite, it’s always changing, it’s always in motion.”

Present – An idea: that everything is possible, that anything can happen: “Flexibility has been a key aspect of my work over the past years, in and outside of Extra-Ordinaire. Nothing is carved in stone: projects can change, surprises can arise, opportunities come and go and it’s up to us to welcome them when they’re there.”

Future – A fundamental (plural): ‘the ones from my childhood’: “The essence of one’s first creations can forge her/his/its identity. I go on with projects being surrounded by opportunities and uncertainty, but in all that I try to stay grounded in things that have been in me almost ever since. I reach back to these fundamentals by spending time in my studio as it’s where I keep all that I’ve gathered through the years, and I keep a lot (I even still have the blankie I had in nursery!). Also, I think that I’m somewhat of a Binamé: it’s a term used by and for the people of Liège (Belgium) who are always eager to meet others without ever holding (pre)judgement. This is very part of who I am.”

“The first thing I do in the morning is: go out and wander for about an hour. No matter where I am in the world, I always try to do that, and I never follow a specific path. This has led me to discover, anywhere, extraordinary places. Of course – and that is at the basis of Extra-Ordinaire – by doing so I witness moments, things, scenes of lives, that are completely ordinary to the people living it but that are extraordinary to me. Why? Simply because it’s different from what I’m used to. Now, with E-O, it’s like diversity has become my ordinary: I’m constantly ‘jumping’ from a new environment to another, discovering new extra-ordinaries each time ;).”

“The more the project moves forward, the more possibilities/opportunities there are. It’s never-ending and there’s beauty in that. I’ve always felt like this project speaks about one fundamental of what human beings are: creators. For example, I believe that a craftsman from India, creates with the same intrinsic intention than a maker in Mexico. That creative intent is very close to our human nature.”