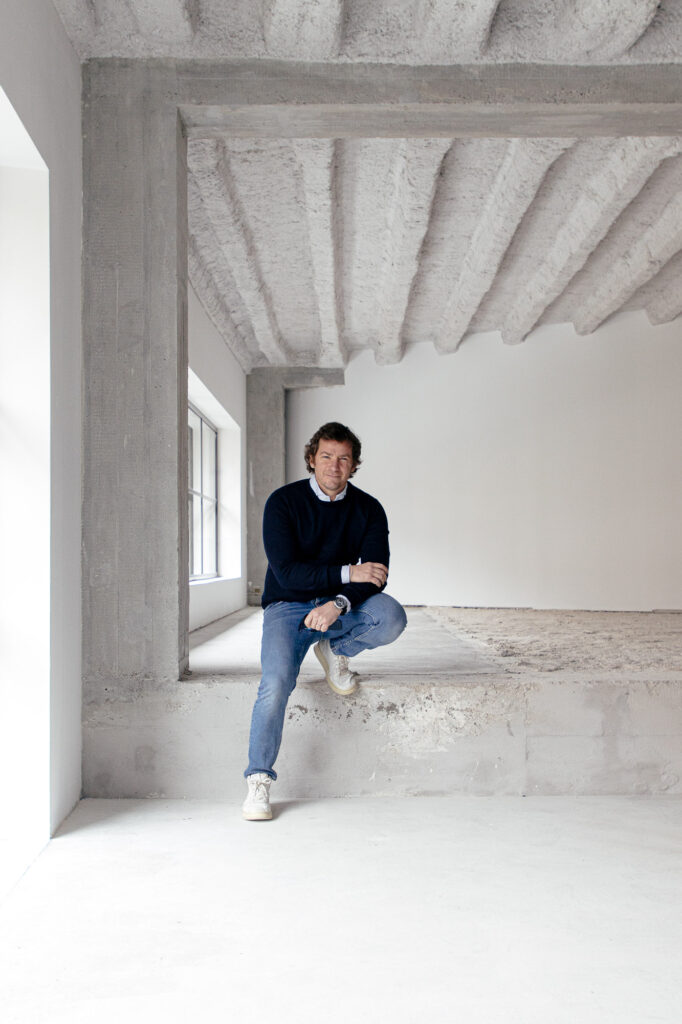 HAVE YOU MET AXEL KUBORN ?

It’s 2022, coworking spaces are flourishing all over the globe, you yourself is even considering joining one if it’s not the case already.

Because why wouldn’t you.

Time’s been over for more than a decade now since freelancers had to either isolate home or work on a 1by1 square table from the local coffee shop with only an adsl connection.

Not only has Axel Kuborn a clear memory of that time, he’s also of the few Belgian visionaries who decided to put an end to it.

Founder and CEO of Silversquare, Axel Kuborn comes with flair, resilience, a pair of boxing gloves and unswerving work ethic to talk about the coworking venture and its collaboration with Extra-Ordinaire.

“Facing a world that is in constant mutation, we believe that we’re stronger by being together, so our job is to make it so that companies and freelancers sharing our spaces have a competitive advantage over the ones who are not part of the ecosystem.”

Let’s discover Axel’s answers to our series of questions:

WHAT DO YOU DO WITH E-O?

“Silversquare has called upon Extra-Ordinaire to produce part of the furnishing & decorative design imagined by Jean-Paul Lespagnard for our soon-to-open Liège-based space.”

“The Extra-Ordinaire shop was one of our first visits in our search for subcontractors. My team and I were fascinated by the eclectic proposal of the project. After that and after being toured the creative studio of Extra-Ordinaire, several offers were made which led us into deciding to collaborate with E-O.”

“Extra-Ordinaire offers both the functionality and the creativity which are required for our environments. On top of that, with E-O, we’re setting up a boutique inside Silversquare Liège in which our members will get to purchase all that has been produced and made available in the coworking space.”

“Extra-Ordinaire also came with the proposal to let Silversquare members refine their workspace/desk by choosing the elements they want in their environment. You get to choose what you use and then, If you want it, you can buy it.”

Discover our Lava Glass, designed for Silversquare : In this video, we take you to Guadalajara, Mexico to follow the conception journey of our exclusive Lava Glass. Inspired by the different stages of lava color, this piece comes to life by layering color sparkles onto a blown glass centerpiece. Find out how it’s made!

“I am what they call a Zinneke – a Brusseleir word for describing someone from Brussels with a mixed cultural heritage. I live in Uccle, and I was born in Ixelles (which doesn’t sound very Zinneke haha). With, on one side, German and Dutch Jewish grandparents who fled to the USA during WW2 and Belgian and Italian grandparents on the other side, I can say that I’m a product of diverse cultural backgrounds.”

NAME 1 PERSON, 1 PLACE, 1 OBJECT THAT SHAPED YOUR PAST, PRESENT AND INSPIRES YOUR FUTURE.

Past – A person: Axel’s grandmother: “She was the pedestal of my family culture. She’s been our intellectual and cultural anchor especially through the weekly Sunday tables she’d organize for the family. She’s at the foundation of my identity and my ambition.”

Present & Future – A person: Axel’s wife: “Family is central to me and she’s at the base of it. She is why I do what I do and why I fight for my values, for who I am. I know it sounds cliché but that’s it.”

Past, present & future – An object: boxing gloves: “Boxing is the best allegory there is to the entrepreneurial life; it comes down to how you can take the hits, the effort is constant, it’s a never-ending learning and you must be able to get back to the basics in order to grow. Also, sometimes you’ll be good, sometimes you’ll suck, and you will certainly at some point underestimate/overestimate your opponent. Resilience and courage are required to thrive.”

“My way not to remain in the routinely reality of daily life is to take part in as many conversations as I can that are outside my areas of knowledge. I reserve time for that, and it enables me to have changes of perspectives. One of the groups I’m in is called Innovative Sharing, it is made of entrepreneurs from different sectors who focus on various philanthropic subjects. It is both nourishing and angle-shifting.”

“What seduced me in the approach of Extra-Ordinaire, what makes it singular is that it’s a shared-brains offer: Designers and craft makers work together in a circular way. I enjoy the multiplicity of origins too: to have, for example, textiles from India or recycled tableware from Mexico which are both products of craft makers is something that is, to us, fantastic. It all comes with a story.”