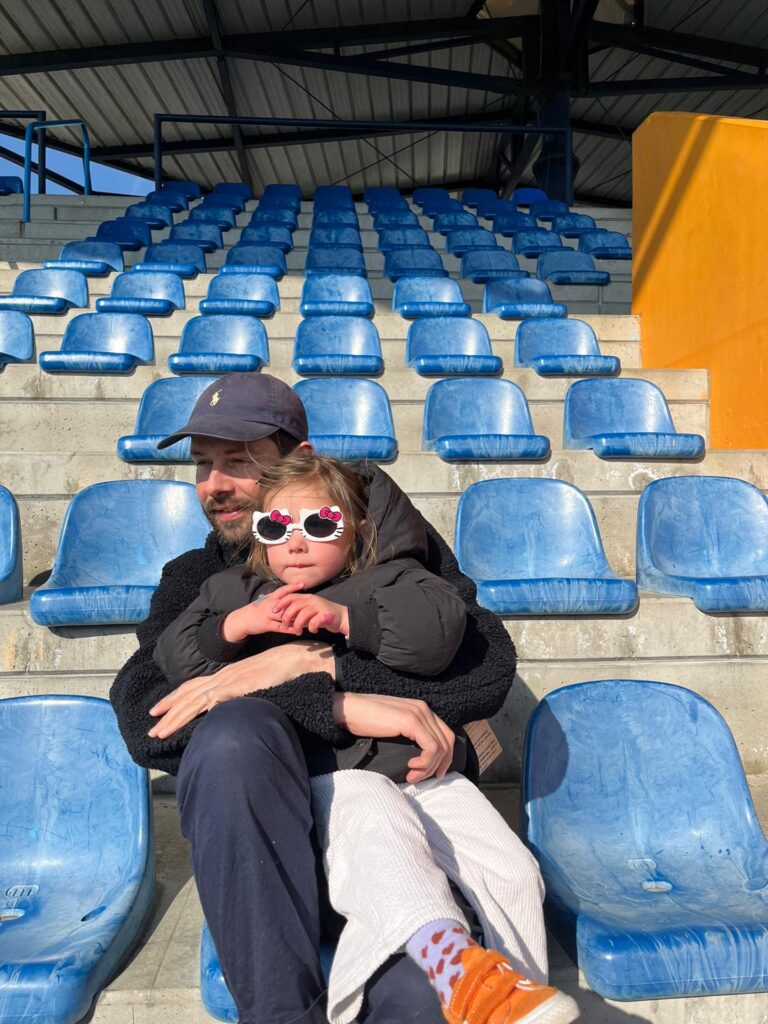 HAVE YOU MET ANTOINE & NINA ?

Ok, you probably can name many, for now. Reason being that you probably don’t know about the two (which kind of makes the question irrelevant, but still) and you most certainly haven’t set eyes on the work of Nina and Antoine, yet. The former; Nina, is a 4-year-old girl, the latter;
Antoine, is her father.

Together, equipped with a set of pastels and a sketchbook, they draw. It’s a fifty-fifty process where Nina engages in a creative momentum (aka ‘squiggles’) to which Antoine applies a formal structural offset. From it, arise sometimes faces, sometimes portraits and other times monsters. Now, setting aside how very cute this father-daughter collaboration is, let’s talk about what business these two have with Extra-Ordinaire and how so pretty cool it is.

Antoine Detaille is the co-founder of Hell’O: an internationally renowned Brussels-based artist collective. Along with Jérôme Meynen – also Hell’O’s co-founder – the pair has been at the embellishment of buildings and walls all across Europe; at times through monumental frescos, else directly on canvas with more regular-sized drawings/illustrations. In both cases and in all colors, Hell’O has been profoundly impacting the (street)art scene for over a decade now.

Talking of impact, Nina’s arrival surely had its own on Antoine’s life, and it wouldn’t be an exaggeration to say that the apple hasn’t fallen far from the tree: since she could lift a marker, she’s made use of it.

As you’ve read a little above (three paragraphs exactly), Nina & Antoine have generated hand-in-hand works of art; multiple series to this day, and Extra-Ordinaire is proudly to be the duo’s first exhibitor. But not all drawings will be displayed, as the initial series is to, forever, only be seen in Antoine’s living room (understandable; it’s the emotional attachment).

Until the exhibition, which will, by the way, be a surprise made to Nina (don’t tell her), Antoine has accepted to take part in answering Extra-Ordinaire’s set of questions. And we’re surely looking forward to interview Nina too, let’s say; for the second expo (the one she’ll know about beforehand).

Nina, if you ever read this, we’re expecting you (but no pressure).

WHAT DO YOU DO WITH E-O?

“With Extra-Ordinaire, we’re setting up an exhibition around the genesis of the project:  the drawings, which 12 to 15 will be exposed. All will be framed but also scanned to be also made available in the form of goodies: postal cards, kids & adults t-shirts, tote bags, and maybe other things.

On top of that, I’m in contact with the tufting artist Shishi whose work is fabulous and who’s keen to create around the work of Nina & I. She’s going to produce a series of rugs based on the drawings, and the shapes of these rugs will follow the ones of the drawings.

I’m feeling like the planets are aligned as this is the perfect project for a first collaboration with Shishi, and Extra-Ordinaire is, without a doubt, the best place for it all to be showcased.

Lastly, I will curate what’s being presented in Extra-Ordinaire’s space.”

“I’m from the Hainaut, a region in Belgium; the city of Tournai to be more precise. I had an art training in secondary school which I followed with graduate studies in plastic arts at ARTS2 in Mons.

I graduated with a masters called ‘Images Dans le Milieu’. For the anecdote, I never went to pick up my degree, it’s still there. For the reason that I had started taking part in art contests prior to finishing school and it led me to being reached by Galleries without having to show any resume.

ARTS2 is where I really blossomed; I would stay there forever after school hours to work on various projects; the workshop was always open. Above all, Mons is where I met my work partner Jérôme. We started with graffiti but, with Belgian weather, it wasn’t always possible to create outside, so we drew and painted too. A project led to another, we chose Hell’O as our name and, more than 10 years later, here we are making a living with it.”

NAME 1 PERSON, 1 PLACE, 1 OBJECT THAT SHAPED PAST, PRESENT AND INSPIRES YOUR FUTURE.

Past – Object: the (paint)brush => “It’s totally cliché but it is what it is. Growing up, I was uncertain of who I was and what I wanted to be. That feeling stayed with me until I started painting. I then realized that it was a return to painting as my mother told me that, very young, I was already doing it. So, once I ‘got my brushes back’ I gained the will to go forward in life and on that path.”

Present – Person: Jérôme => “He’s my work partner but also my best friend: we’re connected in work and in life. Artistically, we’ve managed to set our egos aside and create a joined universe. It even happens that – when we dig into past works – we forget who’s done which part of a drawing, because of how homogeneous the whole process is/was.”

Future – Person: Nina => “She’s the ultimate priority. I’m on a mission to make of her life, and mine, something beautiful. I realize the chance I have by artistically connecting with her now already. I hope we’ll keep on creating together, if she wants it, obviously: it could happen that, at some point, she tells me to get lost. For that reason, I cherish the time and projects we have now even more.”

“I think I’m infinitely fueled with optimism. I’m often told by my entourage that I’m overly loving of people and things. That’s because I’m very realizing how lucky I am to always have been able to do what I like and never to have had the obligation to, for example, hand out CVs to potential employers: I wake up, I know what I want & must do and where I want & must go.

If I could wish a thing for anyone, it would be to handicraft something (anything). For one to find time to be with oneself and oneself only by working with hands is priceless.”

“What’s interesting about Extra-Ordinaire is the diversity of the proposal. Yet, when you’re in the shop, everything seems to be in its right place, because in fact it is. That’s the genius about it. Things arrive from everywhere and, with each, comes a different story. All that mixed up in a place where it is made so homogeneous. On top of that, the location of the shop is a curiosity in itself: to be in the most touristic area of Brussels, right in front of a lobster restaurant welcoming almost only tourists, it’s ‘something’.

To get back to what’s in the shop: it’s really the duality of the relationship the objects have with each other: to have, for example, a music box from India right next to a mask from Mexico; that’s just great.”